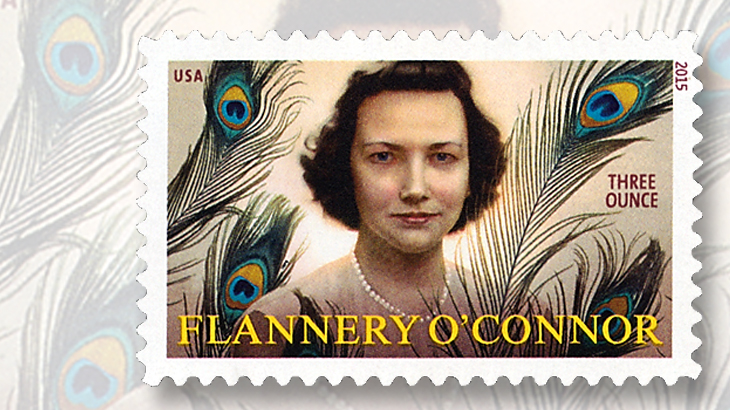 At Georgia College and State University, O’Connor was editor of Corinthian, the college literary magazine. She was accepted into the University of Iowa’s prestigious Writer’s Workshop, and her early stories were published in Sewanee Review. She received her Master of Fine Arts degree in 1947.

O’Connor was stricken with lupus in 1950 and lived on the family farm, Andalusia, in Milledgeville, Ga., while continuing to write short stories and to work on her first novel.

Her novel Wise Blood was published in 1952, followed three years later by the short story collection A Good Man is Hard to Find, and Other Stories.

A second novel, The Violent Bear it Away, was published in 1960. She also wrote a number of reviews and essays, including a 1961 article for Holiday magazine titled “Living With a Peacock.”

The Postal Service described O’Connor’s writing as “unsettling and darkly comic stories and novels about the potential for enlightenment and grace in what seem like the worst possible moments.”

Another short story collection, Everything That Rises Must Converge, was published in 1965.

A collection titled The Complete Stories won the 1972 National Book Award for fiction.