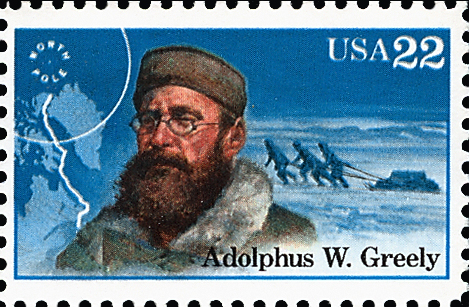 In 1861, at age 17, Greely enlisted in the U.S. Army as the Civil War began. After the war, he joined the U.S. Signal Corps as a lieutenant, with responsibilities that included establishing a national weather bureau.

He volunteered in 1881 to command the Lady Franklin Bay Expedition to the Arctic Circle, with the goal of creating a meteorological reporting station in the far north.

Initial efforts were successful, but amid harsh conditions and failed efforts to reach the expedition with supplies, food ran dangerously low. In 1883, seeking food and rescue, Greely and his men moved south to a camp established as a rendezvous point, but the rations there were minimal, and before long members of the expedition began to die of starvation and illness. One man was executed for stealing food after being repeatedly warned.

Out of the 25-man expedition, only seven remained alive when a rescue ship found them in June 1884; one more died soon after. The team's many recorded observations were preserved.

Greely was appointed Chief Signal Officer after his return and advanced the Army's achievements in telegraph, radio and airplane use.

For his military service and leadership, he was awarded the Medal of Honor in 1935 at age 90. He is buried at Arlington National Cemetery.

Greely was commemorated on a 22¢ stamp issued May 28, 1986, as part of a set of four honoring Arctic explorers.