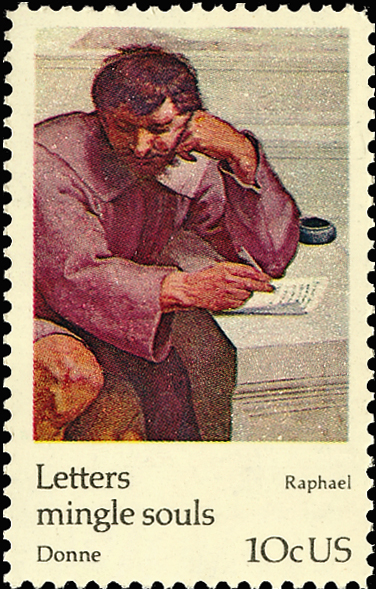 There is more than a little uncertainty about the birthdate of Raffaello Sanzio, the Italian Renaissance artist known simply as Raphael.

One story says that the artist was born on Good Friday, and also died on Good Friday 37 years later. That places his birthdate as March 28, 1483.

Some of the confusion might be attributed to the Gregorian reform of the Julian calendar, which took place in 1582.

Raphael was schooled as an artist by his father in Urbino, and later studied and worked in Florence and Rome, where he learned from the Renaissance masters Michelangelo and Leonardo da Vinci. At the Vatican he was commissioned to paint frescoes for the pope's private rooms.

He was a prolific and precise artist known in particular for his many graceful Madonna paintings.

Raphael's artwork has been featured on United States stamps. His Madonna of the Candelabra appeared on the Christmas forever stamp issued in 2011 (Scott 4570). The artist's name is found at lower left below the stamp illustration.

A 10¢ stamp issued in the 1974 set commemorating the Universal Postal Union centenary (Scott 1530) depicts Michelangelo in a detail of The School of Athens, a fresco Raphael painted in 1509 as part of the paintings for the Stanza della Segnatura commissioned by Pope Julius II for the Vatican. Raphael's name on this stamp is shown below the lower right corner of the artwork.