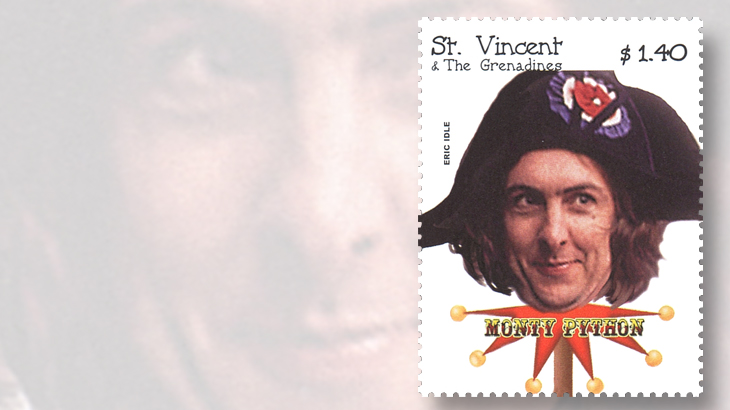 Eric Idle, a member of the Monty Python comedy group, is pictured on a $1.40 stamp from St. Vincent and the Grenadines. The stamp and five others were issued in a pane of six in 2000.

English writer and comic actor Eric Idle turns 74 years old today. He was born March 29, 1943, in South Shields, a coastal town in England’s Northeast region. He studied English Literature at Pembroke College at Cambridge, where he was president of the drama club and performed on stage and on television, and earned his bachelor’s degree in 1965.

He wrote for BBC television and radio, and was a regular on the children’s television show Do Not Adjust Your Set, which led to the formation of the comedy troupe Monty Python with Graham Chapman, John Cleese, Terry Gilliam, Terry Jones and Michael Palin.

The group found fame with the BBC series Monty Python’s Flying Circus (1969-73), followed by stage projects and several successful feature films, including Monty Python and the Holy Grail (1975) and The Meaning of Life (1983).

Idle was also a member of the Rutles, a parody of the Beatles, and featured in the TV mock documentary The Rutles: All You Need is Cash (1978).

A multitalented creative artist, Idle made many film and television appearances over the years, and his writing credits include the successful stage production of Monty Python’s Spamalot, which won the 2005 Tony Award for best musical.

Six-stamp panes honoring Monty Python were issued in 2000 by St. Vincent and the Grenadines (Scott 2801) and Dominica (2232). Each set includes one stamp picturing Eric Idle.

In 2015, Great Britain issued a nondenominated 1st-class stamp honoring Monty Python and picturing Idle with the group, as part of Royal Mail’s Comedians commemorative set of 10.