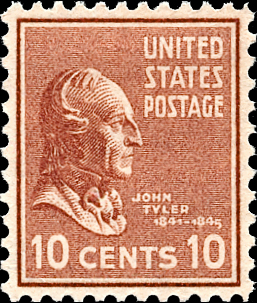 Pneumonia brought about the death of William Henry Harrison after only 32 days as president in 1841, and his vice president, Tyler, served out the remainder of Harrison's term.

Tyler had studied law at the College of William and Mary, and served in the House of Representatives, as governor of Virginia, and as a senator.

Nominated as Harrison's running mate by the Whig Party, he found himself at odds with the Whigs when, as president, he vetoed banking legislation the Whigs supported. They retaliated by expelling Tyler from the party.

Tyler's efforts to annex the independent territory of Texas were eventually successful, and Texas became a state during the presidency of his successor, James K. Polk.

Years later, Tyler would serve in the Confederate House of Representatives. He died in 1862.

Sometimes described as one of the nation's more obscure presidents, Tyler has appeared on fewer United States stamps (3) than British actor Daniel Radcliffe (7) who portrayed Harry Potter in the film series of the same name.

In 1986, Tyler was shown on a 22¢ stamp in the Presidential commemorative set issued for the Ameripex International Stamp Show (Scott 2217a).