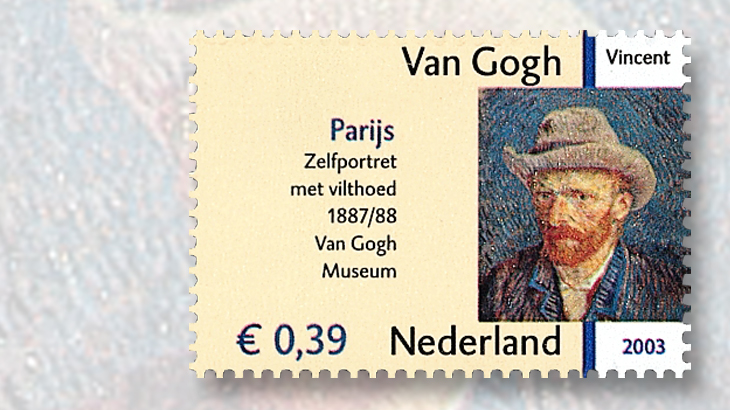 A stamp from the Netherlands issued in 2003 to commemorate the 150th birth anniversary of artist Vincent Van Gogh.

Dutch post-impressionist painter Vincent Van Gogh was born March 30, 1853, in the southern town of Zundert in the Netherlands. He lived only a little more than 37 years, mostly in poverty, and died July 29, 1890, of an infection from a gunshot wound to the chest that is generally believed to have been self-inflicted.

As a teenager, Van Gogh worked for an art gallery in The Hague, and later lived in London and in Brussels. He found work as a religious teacher but was unsuccessful, and decided to pursue life as an artist. He moved to Paris in 1886, initially living with his brother Theo, an art dealer. Two years later he moved to his “yellow house” in the south of France.

Struggling at length with physical and mental illness, and never fully appreciated for his art during his lifetime, Van Gogh created what have become some of the world’s most treasured artworks, such as The Starry Night, Bedroom in Arles, Sunflowers, Irises, Portrait of Dr. Gachet, and his many self-portraits.

Van Gogh’s artwork has been featured in the designs of many stamps issued by countries all over the world. His native Netherlands has honored the artist often, including a pane of 10 €0.39 stamps issued Jan. 2, 2003, to mark the 150th anniversary of his birth. That set includes one stamp featuring his 1887-88 Self-Portrait with Felt Hat (Netherlands Scott 1142d).