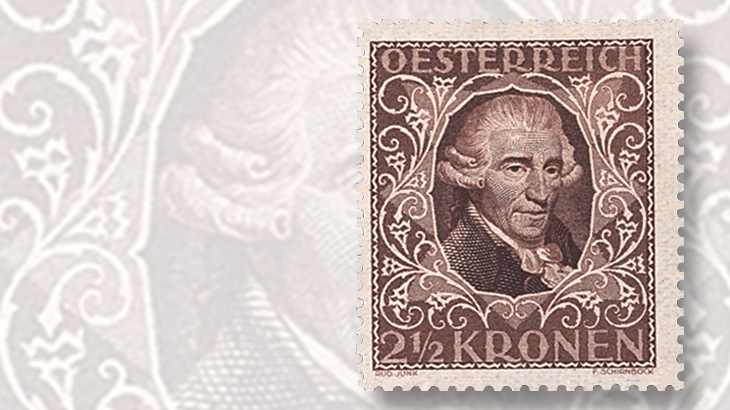 An early stamp honoring composer Joseph Haydn is this 1922 semipostal from Austria.

Famed Austrian composer Franz Joseph Haydn was born March 31, 1732, in Rohrau, Austria. A younger brother, Johann Michael, was born five and a half years later, and was also an accomplished musician and composer. Following customs of the day, the brothers were known as Joseph and Michael.

With a beautiful voice, Joseph Haydn was part of the church choir, and was sent to sing and study music in Vienna while still a youngster. He taught himself music theory and began composing music after leaving school.

In 1761 he obtained a conducting position outside of Vienna with a wealthy family, and his fame as a composer grew considerably throughout Europe in the years to follow. He befriended Wolfgang Amadeus Mozart, who was some 25 years younger, in 1784, and traveled to London, where his music was particularly popular, at the beginning of 1791, staying there for four years.

During his lifetime he completed 104 symphonies, as well as chamber music, operas, masses, concertos and more. He was also a teacher for Ludwig van Beethoven, who was born some 38 years after Haydn.

As one of the greatest composers in history, and an important figure in the early years of the Classical period, Haydn has been honored on stamps from all over the world. A 2½-krone stamp from his native Austria was issued April 24, 1922, in a set of six semipostals honoring musicians (Scott B50).