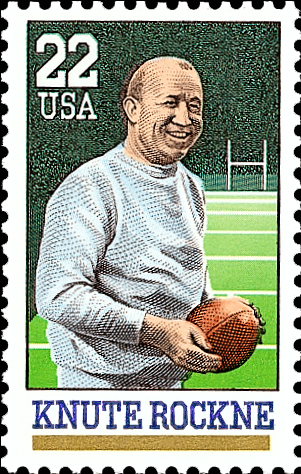 Knute Rockne, the football coach so closely associated with the Fighting Irish of Notre Dame, was born March 4, 1888, in Voss, Norway. He moved with his family to the Chicago area in 1893, and played football during high school.

After working for the Chicago post office for four years, he began to study at Notre Dame in 1910. As a member of the Notre Dame football team, Rockne helped to orchestrate a decisive defeat of the heavily favored Army team at West Point in 1913.

He graduated with a science degree and taught chemistry at Notre Dame while assisting head football coach Jesse Harper. When Harper retired after the end of the 1917 season, Rockne became the Notre Dame head coach.

He served as head coach for 13 years, leading his Notre Dame teams to an astounding career record of 105-12-5, the best in college football history. His coaching innovations included the development of a passing offense and a form of platooning.