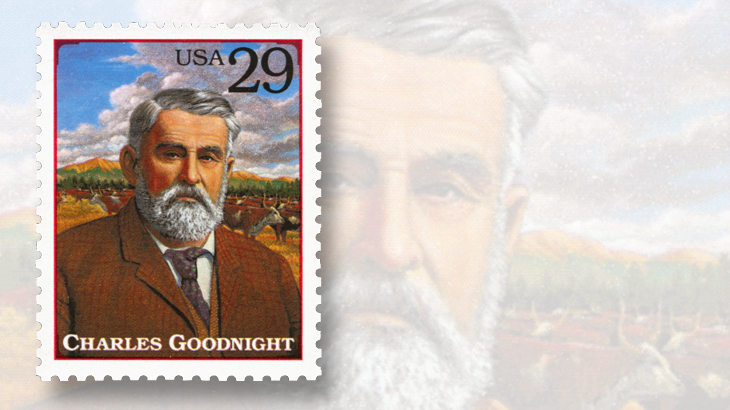 The 29¢ stamp honoring Charles Goodnight, from the 1994 Legends of the West set.

Charles Foxwing Goodnight Jr. was born March 5, 1836, in Macoupin County, Ill., and moved with his family to Milam County, Texas, in 1845.

With less than a year’s formal education, Goodnight became an able scout and hunter, herded cattle, and established important cattle trails throughout the West. He served as a scout for the Confederates during the Civil War, and with cattleman Oliver Loving, he forged the Goodnight-Loving trail across Texas and into New Mexico in 1866.

During his time on the trail, Goodnight created the chuck wagon to carry provisions and equipment to feed the trailhands.

Goodnight married schoolteacher Molly Dyer in 1870, and with Scottish businessman Jack Adair he established the huge JA ranch in the Texas panhandle. Goodnight managed the ranch with a firm hand and tolerated no whiskey, fighting, or gambling among the cowboys.

He and Molly left the JA ranch in 1887 and built a new ranch near Goodnight, Texas. After years as one of the great cattle barons of the west, Goodnight became a civic leader and benefactor to the town, establishing a Methodist church and a school, and he found success as a landowner and developer. Goodnight died in 1929 at age 93.