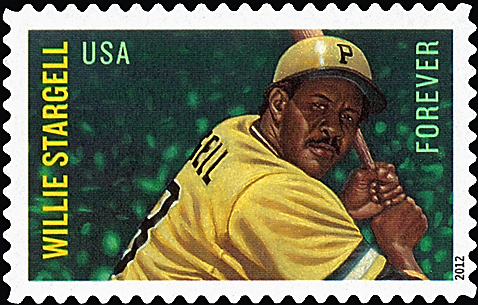 Baseball All-Star Willie Stargell of the Pittsburgh Pirates, born March 6, 1940, was honored on a forever stamp in 2012.

Stargell, born Wilver Dornel Stargell on March 6, 1940, was the youngest of the four by far. The left fielder turned first baseman played his entire major league career for the Pittsburgh Pirates, from 1962 to 1982. He was selected seven times for the honor of playing in the annual All-Star Game, and twice took home a World Series championship ring, in 1971 and in 1979.

He was named the most valuable player in that 1979 series, collecting 12 hits in 30 at bats and crushing a clutch game seven home run against the Baltimore Orioles in a dazzling Pirates victory.

Stargell was known and feared as a home run hitter, twice claiming the National League home run title and closing out his career with 475 round-trippers.

A natural clubhouse leader, Stargell was known as "Pops" in his later years, and after retirement he turned to coaching, helping young players who were hoping to create their own major league legacies.

Willie Stargell was inducted into the Baseball Hall of Fame in 1988, his first year of eligibility.

The forever stamp honoring him (Scott 4696) shows the Pirates star at the plate, waiting to send the next pitch into the seats.