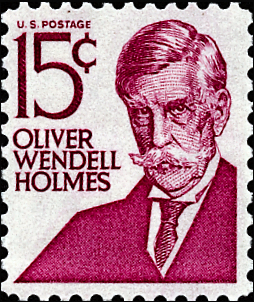 His mother, Amelia Lee Jackson, was an abolitionist, and Holmes also supported the movement to end slavery in the United States. Although he was studying at Harvard when the Civil War broke out in 1861, he joined the 20th Massachusetts Volunteer Infantry, commissioned as a lieutenant. He served for three years, suffering serious wounds during battles at Ball's Bluff, Antietam and Chancellorsville.

He returned to Harvard in 1864 to study law, graduating in 1866, and would later accept a position to teach law there, prior to his appointment to the Supreme Court of Massachusetts.

In 1902 he was selected for the United States Supreme Court by President Theodore Roosevelt, and served as an associate justice for nearly 30 years.

During his time on the high court, Holmes was often referred to as "the Great Dissenter" for the concise opinions he wrote in opposition to the majority, and he was known as a champion for free speech.

A 15¢ stamp honoring Holmes was issued in the Prominent Americans definitive series on March 8, 1968, coinciding with the 127th anniversary of his birth. The design is modeled after a photograph by National Photos that appeared in the April 8, 1951, The New York Times. The design exists in several varieties, including booklet panes (1288Bc) and coil stamps (1305E) issued June 14, 1978, more than 10 years after the original sheet stamp.