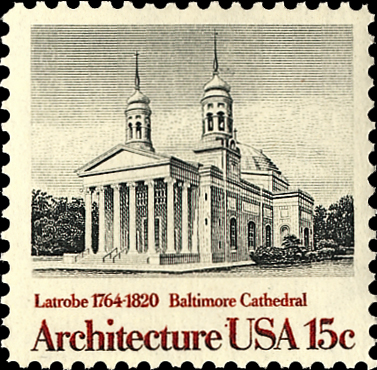 Benjamin Henry Latrobe, born May 1, 1764, designed the Baltimore Cathedral shown on this 1979 stamp, and sections of the U.S. Capitol.

Architect and engineer Benjamin Henry Latrobe was born May 1, 1764, in the county of Yorkshire in Northern England. After touring the continent as a young man, and an apprenticeship with engineer John Smeaton, Latrobe was appointed Surveyor of the Public Offices in London and was responsible for numerous construction and design projects.

Latrobe left England for the United States in 1795, settling first in Virginia, then in Philadelphia, and finally moving to Washington, D.C.

During this period he designed a number of structures, including the State Penitentiary in Richmond and the Bank of Pennsylvania in Philadelphia.

In Washington he was appointed as the second Architect of the Capitol and supervised its construction. In association with Thomas Jefferson and James Hoban, Latrobe was also involved in designs for the White House.

He left for Baltimore in 1817 and designed the Baltimore Cathedral (the Basilica of the Assumption of the Blessed Virgin Mary) which is depicted on the 15¢ stamp issued in 1979 bearing Latrobe's name (Scott 1780).

After creating a plan for the New Orleans municipal waterworks, Latrobe died there in 1820.