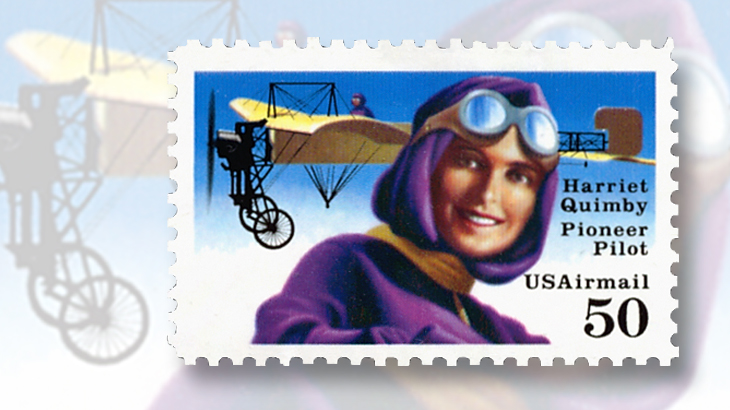 Pioneer pilot Harriet Quimby was honored on a 50¢ airmail stamp issued in 1991.

Ask when and where Harriet Quimby was born and you might hear a variety of different answers. Her birthdate was probably May 11, 1875, and it’s fairly certain she was born near Arcadia Township, Mich., though some claim it was Coldwater, Mich. (more than 200 miles to the south) or Arroyo Grande, Calif. (more than 2,000 miles to the west).

Quimby is known as a pioneer pilot, but she first became a writer and journalist in San Francisco before moving to New York. Less than eight years after the Wright Brothers made their historic flight on Dec. 17, 1903, Quimby enrolled in flight school and became the first American woman to receive her pilot’s license, on Aug. 2, 1911.

She continued to work as a writer while piloting in aerial demonstrations. On April 16, 1912, she became the first woman to pilot an airplane across the English Channel. Her solo feat was barely noticed at the time, however, because newspapers were filled with stories about the tragic sinking of the RMS Titanic the day before.

Her final flight came on July 1, 1912, during the Harvard-Boston air meet. A freak event at an altitude of 1,000 feet caused the ejection of Quimby and her passenger from her Bleriot monoplane. Both perished after falling into Boston Harbor.