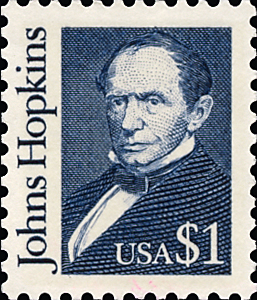 Johns Hopkins is familiar as the name of a private university and a research hospital, both based in Baltimore, Md.

They are named for the wealthy businessman and philanthropist whose riches helped to fund these institutions intended to help others.

Johns Hopkins was born May 19, 1795, in Anne Arundel County, Md., the second eldest of 11 children in a Quaker family on a successful tobacco plantation. In accordance with their Quaker beliefs, the family chose to free its slaves in 1807.

That moral decision made life more difficult for the Hopkins family, and Johns, whose first name was a tribute to an ancestor whose last name was Johns, left school at age 12 to help on the family farm.

Hopkins left home at age 17 to live with his uncle's family and work in his grocery business. He fell in love with his cousin Elizabeth, but the family prohibited their plans for marriage. Johns and Elizabeth remained close all their lives, but never married each other, or anyone else.

After establishing a wholesale business in 1819, Hopkins became a successful investor and banker, amassing a great fortune as a major shareholder of the Baltimore and Ohio Railroad. With his money he provided financial support for young entrepreneurs and found ways to assist charitable endeavors.

Hopkins was a lifelong abolitionist and a staunch supporter of President Abraham Lincoln and the Union cause during the Civil War.

He used his wealth to establish an institution for orphaned black children, and hospitals for the mentally ill.

Near the end of his life he arranged a $7 million bequest to establish the hospital and university that today bear his name. Hopkins died of pneumonia on Dec. 24, 1873.

A $1 stamp honoring Johns Hopkins (Scott 2194) was issued in the Great Americans definitive series on June 7, 1989.