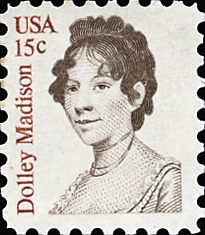 Dolley Madison, the wife of President James Madison, was born Dolley Payne on May 20, 1768, in Guilford County, N.C. She was the fourth of eight children in a Quaker family.

When she was 21 years old, she married a lawyer named John Todd in Philadelphia. They had two children together, but an epidemic of yellow fever in 1793 claimed three-month old William Isaac Todd. John Todd died of the fever on the same day, and Dolley was left widowed, a single mother in mourning at age 25.

She met Congressman James Madison through a mutual friend, Aaron Burr, and though Madison was 17 years older, the two married in 1794. When Madison left Congress the family moved to Montpelier, the estate in Orange County, Va., but Madison was asked by President Thomas Jefferson to serve as Secretary of State, which required a move to Washington, D.C., in 1800.

Jefferson was a widower, and Dolley would occasionally act as hostess during official White House functions. She became a popular and admired figure known for her charming personality and hospitality.

In 1808, James Madison was elected president, and Dolley became the nation's first lady. During the War of 1812 in her husband's second term, the invading British army was heading toward Washington, and with the president absent from the White House, Dolley managed the exit of family and staff from the executive mansion. History relates that Dolley was insistent that Gilbert Stuart's full length portrait of President George Washington be preserved, and it was removed from the wall and carried to safety before the British arrived and set the White House on fire.

In 1978 the U.S. Postal Service experimented with a ministamp format that produced 150 stamps per pane, thereby cutting production costs. The second stamp of this type was issued May 20, 1980, a 15¢ stamp honoring Dolley Madison on the anniversary date of her birth (Scott 1822).