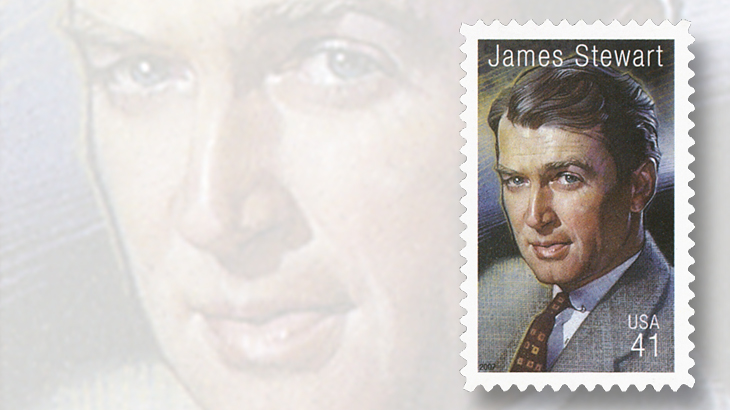 Film star James Stewart was honored on a 41¢ Legends of Hollywood commemorative in 2007.

American film star James Stewart was born May 20, 1908, in Indiana, Pa. He studied architecture at Princeton University, graduating in 1932.

Stewart’s interest in acting grew while attending college, and after graduation he shared a room in New York City with a young actor named Henry Fonda. The two men sought out theater roles on Broadway and eventually came to be lifelong friends.

Stewart was signed to an MGM contract in 1935 and appeared that year in the crime drama The Murder Man starring Spencer Tracy. He landed numerous roles in feature films before starring in Mr. Smith Goes to Washington in 1939, which earned him an Oscar nomination. He won the Oscar for best actor for his role in the 1940 comedy The Philadelphia Story.

During World War II, Stewart served in the United States Army Air Forces as a B-24 combat pilot. He continued in the Air Force Reserve and was promoted to brigadier general in 1959. He retired from the military in 1968.

A versatile actor, Stewart appeared in family fare, thrillers, comedies, historical biographies, and more. His postwar films include It’s a Wonderful Life (1946), Harvey (1950), Rear Window (1954), The Man Who Shot Liberty Valance (1962), and many others. In 1970, he starred in The Cheyenne Social Club with old friend Henry Fonda.