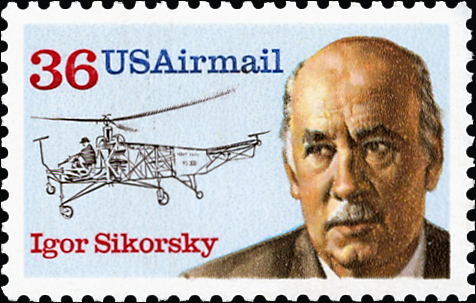 The third airmail stamp issued in 1988 had a 36¢ denomination to fulfill the new rate for international airmail postcards, which had gone into effect more than two months earlier.

The stamp pictures aircraft designer and engineer Igor Sikorsky, who was born May 25, 1889 in Kiev, Ukraine, when it was part of the Russian empire. He left during the 1919 revolution and moved to the United States, becoming a U.S. citizen in 1928.

The 36¢ airmail stamp honoring him (Scott C119) shows a portrait of Sikorsky by Ren Wicks, based on photographs provided by the Sikorsky Aircraft Corp. At the left side is an image of Sikorsky piloting his first successful helicopter, the Voigt-Sikorsky VS-300.

Sikorsky had great success as an aircraft designer in Russia, having designed the world's first four-engine airplane. He lost his personal fortune when he came to the United States, but by 1923 he re-established himself and founded the Sikorsky Aero Engineering Corp.

His helicopter was constructed in 1939 and flew successfully the following year.

Sikorsky died at age 83 in 1972. The first-day ceremony for the Sikorsky airmail stamp was held in Stratford, Conn. at the Sikorsky Aircraft Corp.