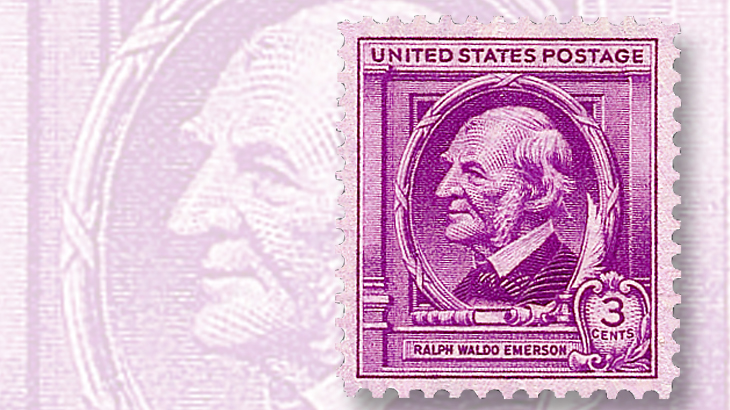 The 3¢ stamp honoring Ralph Waldo Emerson is part of the 1940 Famous Americans issue.

Ralph Waldo Emerson, an American essayist, philosopher, lecturer and poet, was born in Boston, Mass., on May 25, 1803. He would become a leader in a philosophical movement known as American Transcendentalism, which Emerson described as idealism.

Principles of transcendentalism embrace the power of thought and personal consciousness, a belief in free will and the importance of nature.

Emerson studied at Harvard College and Harvard Divinity School, and was ordained as a junior minister in Boston. He resigned from his position in 1832 and traveled to Europe, where he met with philosophers and poets including Samuel Taylor Coleridge and William Wordsworth. He began lecturing the following year, and in 1840 became a writer for The Dial, a journal of transcendentalism, of which he would later become editor.

His lectures were revised and published as essays, and Emerson became an important influence on later writers, including Henry David Thoreau, Walt Whitman and Emily Dickinson.

Emerson was honored on a 3¢ stamp in the American Authors set of the 1940 Famous Americans issue (Scott 861).