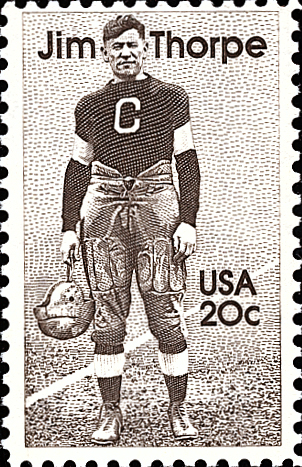 Jim Thorpe, a remarkable athlete whose skill and talent spanned several sports in both amateur and professional venues, was born May 28, 1886 or 1887, on American Indian land near Prague, Okla. His given name was Wa-Tho-Huk, which means "Bright Path."

Thorpe has been honored on two United States stamps. The first, issued May 24, 1984 (Scott 2089), is a 20¢ commemorative showing Thorpe in his football gear as a member of the Canton Bulldogs of the American Professional Football Association (later the National Football League).

Fourteen years later, on Feb. 3, 1998, a 32¢ stamp honoring Thorpe was issued as part of the Celebrate the Century set commemorating people and events of the 1910s. Along with a portrait of Thorpe, the stamp shows him completing a high jump, and has the inscription "Star at Stockholm."

At the 1912 Olympic Summer Games in Stockholm, Sweden, Thorpe won gold medals in both the pentathlon and the decathlon. Olympic officials later disqualified Thorpe for having received a small salary as a semiprofessional baseball player two years earlier, but in 1983, replicas of the gold medals were returned to Thorpe's family, and his records at those 1912 Games were restored.

Thorpe began a professional baseball career in 1913, and later moved on to professional football, where he played and coached, and helped to form the American Professional Football Association.

Thorpe, who died in 1953, has been described as the greatest athlete of the 20th century.