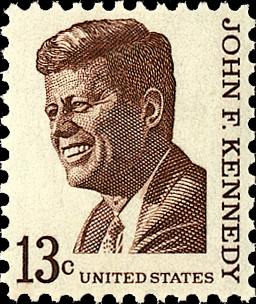 John Fitzgerald Kennedy was born in Brookline, Mass., on May 29, 1917. The man who would become the nation's 35th president was the second of nine children in the family of Rose Fitzgerald Kennedy and businessman Joseph Patrick Kennedy Sr.

John Kennedy attended the Choate School in Connecticut and entered Harvard in 1936, where he studied history and government. After graduation, Kennedy joined the Navy with World War II underway and was assigned command of patrol torpedo boat PT-109 in the South Pacific. Rammed by a much larger Japanese warship while on patrol in 1943, the PT boat was destroyed and two of Kennedy's crew were killed. Though injured, he saved another crew member, led the survivors to safety, and was awarded the Navy and Marine Corps medal for courage.

After the war, Kennedy ran for Congress in Massachusetts and won the seat in 1946. He served three terms and was elected to the U.S. Senate in 1952.

The following year Kennedy married photographer and journalist Jacqueline Lee Bouvier; their daughter Caroline was born in 1957, and a son, John Jr., was born in 1960. A son born prematurely in 1963, Patrick, died two days after birth.

Kennedy was chosen as the Democratic Party's candidate for the 1960 election, which he won, defeating the sitting Republican vice president, Richard Nixon.

During his presidency, Kennedy struggled with the Cold War between the United States and the Soviet Union, confronting the Russians in the 1962 Cuban missile crisis. He proposed the founding of the Peace Corps and challenged America to safely land a man on the moon before the end of the decade. He proposed important civil rights legislation in 1963, which President Lyndon Johnson would sign into law the following year, after Kennedy's death.