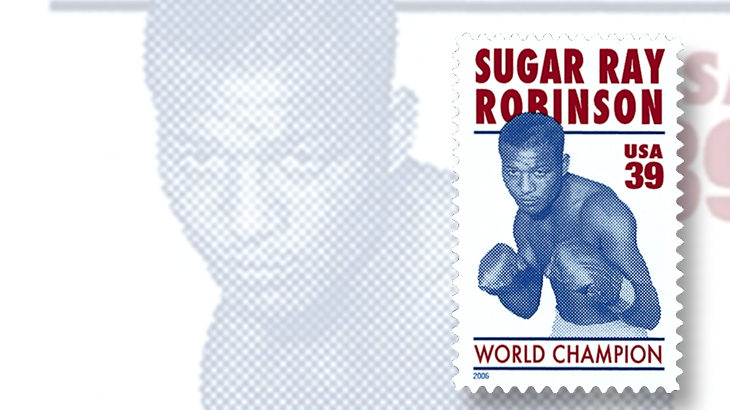 Boxing champion Sugar Ray Robinson was commemorated on a 39¢ stamp in 2006.

Sugar Ray Robinson, a dominating champion in the sport of professional boxing in the 1940s and 1950s, was born Walker Smith Jr. in Ailey, Ga., on May 3, 1921. He grew up in Detroit, Mich., moving with his mother to Harlem in New York City at age 12 when his parents separated.

He began boxing at 15, taking on the name Ray Robinson after borrowing identification from an older friend to qualify for fights.

The talented young boxer won New York Golden Gloves titles at featherweight in 1939 and lightweight in 1940, turned pro and began a remarkable string of 40 undefeated matches. In his career he won 175 bouts and lost 19, with six draws and two no contests. He became world champion as a welterweight, and later earned the title as a middleweight.

After the end of his boxing career, Robinson took up acting on television and in films. He was diagnosed with diabetes and Alzheimer’s disease, and died in 1989 at age 67.