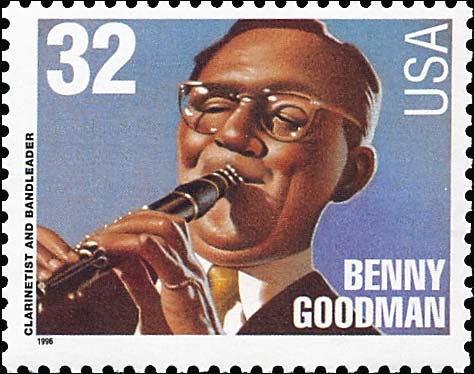 Goodman took up the clarinet at age 10, and by age 14 he was performing in a group with legendary jazz musician Bix Beiderbecke.

In August 1925, Goodman joined drummer and bandleader Ben Pollack in Los Angeles, but the band soon moved to Chicago, where Goodman made his first recordings.

At just 20 years old, Goodman began working in New York and recorded with a number of bands. He assembled his own group in 1934 and began performing on the national NBC radio program Let's Dance, with his hot swing arrangements eventually captivating fans across the country.

By 1938 Goodman and his band were playing Carnegie Hall. During his lengthy and successful career he performed with many jazz greats, including Lionel Hampton, Gene Krupa, Louis Armstrong and Count Basie.

Benny Goodman was featured on a 32¢ stamp issued Sept. 11, 1996 (Scott 3099), part of the Big Band Leaders set in the American Music commemorative series.