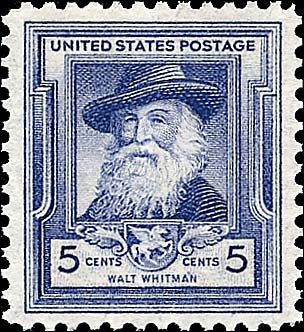 American poet and journalist Walt Whitman was born May 31, 1819, in Long Island, N.Y. He attended public school in Brooklyn, but quit at a young age to work as an office boy and a printing apprentice.

He returned to Long Island to teach school, but was drawn back to printing, editing and writing. His essays were featured in Democratic Review and The New World, and he wrote for other New York city newspapers.

In the 1850s he began writing what would become a life's work, the epic poetry collection Leaves of Grass, which he published himself in 1855.

An 1865 poem, O Captain! My Captain! mourns the fallen president Abraham Lincoln, as the country rejoices for the end of the Civil War. The poem was first published in a pamphlet anthology, Sequel to Drum-Taps.

Whitman would revise and republish Leaves of Grass, which grew in size as its author achieved national prominence.

He was commemorated by the United States Post Office Department with a 5¢ stamp issued Feb. 20, 1940 (Scott 867), in the American Poets set of the Famous Americans series.