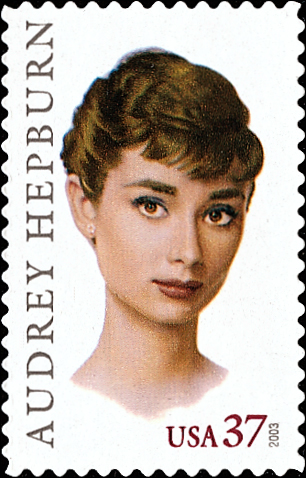 Actress and humanitarian Audrey Hepburn was born May 4, 1929. She was honored on a commemorative stamp in 2003.

As a movie star, Audrey Hepburn earned the admiration of millions, but her humanitarian work with UNICEF meant the most to her, and commands equal importance in her legacy.

Hepburn was born Audrey Kathleen Ruston May 4, 1929, in Brussels, Belgium. During the Second World War she lived in the Netherlands when it was occupied by Nazi Germany, and suffered, as many did, from malnutrition and illness because of food shortages. These experiences during her youth would influence her work to help children in her later years.

As a young woman she studied ballet and also worked as a model. In London she began acting on stage. Her first film role was a small part as a stewardess in the 1948 movie Dutch in Seven Lessons. After a handful of additional film projects, she landed the female lead in Roman Holiday opposite Gregory Peck in 1953, winning the Academy Award for Best Actress. She would star in many additional movies, including Sabrina (1954), Breakfast at Tiffany's (1961), Charade (1963) and Wait Until Dark (1967).

Her performance in the play Ondine won her the 1954 Tony Award for Best Leading Actress.

During the last 25 years of her life she appeared in just four feature films, devoting her time instead to humanitarian efforts on behalf of children. She participated in numerous health care and food distribution programs in Asia, Africa and Central America. She was awarded the Presidential Medal of Freedom in 1992.

The 37¢ stamp honoring Audrey Hepburn was issued June 11, 2003, with an illustration by Michael Deas.