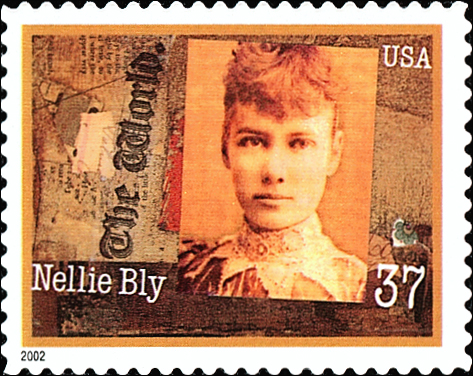 She was hired as a writer by The Pittsburg Dispatch after she sent in a letter in reply to a published column. Given the pen name Nellie Bly, she was relegated to the women's pages, but wrote a series of reports on social issues.

Dissatisfied with her assignments, she moved to New York and found work at The World. When her editor suggested an expose of New York mental asylums, Bly feigned insanity to get herself committed, and wrote an extensive article on the horrendous conditions to which inmates were subjected.

Bly then sought to travel around the world in less time than the 80 days taken by the fictional Phileas Fogg in the 1873 novel Around the World in Eighty Days by Jules Verne. She completed her trip in 72 days, establishing a world record, and reporting along the way.

Bly often wrote in defense of the downtrodden and exposing corruption, sometimes taking on disguises to gather her material.

She retired at age 31, but after several years running a manufacturing business, Bly returned to reporting, writing for the New York Evening Journal. She died of pneumonia at age 57.

The stamp honoring Bly (Scott 3665) shows a photograph of the young reporter from around 1890, and part of the nameplate for The World from an 1890 edition.

A new film about Nellie Bly from TriCoast Studios and Cafe Pictures titled 10 Days in a Madhouse is scheduled for theatrical release Sept. 25.