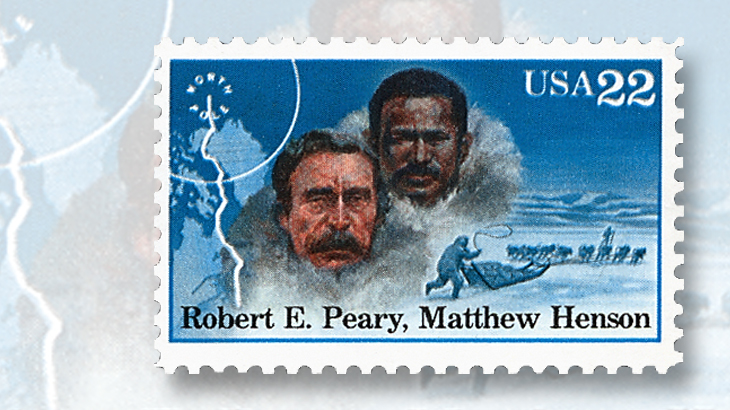 Explorers Robert E. Peary and Matthew Henson are honored on a 22¢ commemorative stamp issued in 1986.

After graduating from Bowdoin College, Peary joined the U.S. Navy as a civil engineer and traveled to Greenland in 1886. Accompanied by Christian Maigaard of Denmark, he traveled deep into the arctic, and became determined to be the first man to reach the North Pole.

Assigned to survey routes for the proposed Nicaragua Canal, Peary hired Matthew Henson as his assistant, and returned to Greenland in the 1890s. In 1908, Peary attempted to reach the North Pole by sled, accompanied by Henson, Donald B. MacMillan, and some 40 Inuit guides and explorers. Sponsored by the National Geographic Society, Peary reported reaching the geographic North Pole on April 6, 1909, but over the years questions have arisen about the accuracy of his navigation, and subsequently, his claim.

Writing about Peary’s accomplishments for the National Geographic Society in 2009 to mark the 100th anniversary of his claim, David Maxwell Braun said, “Whatever the truth is, there can be no doubting that the expedition a century ago was an extraordinary test of courage and determination.”