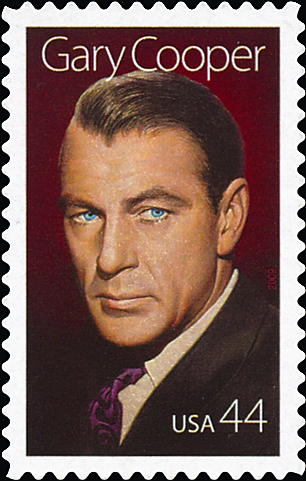 Screen actor Gary Cooper, who was born May 7, 1901, was honored on a 44¢ commemorative stamp in 2009 as the 15th issue in the popular Legends of Hollywood series.

The Legends of Hollywood stamp (Scott 4421) was Cooper's second stamp appearance. His first came in 1990 as part of the Classic Films commemorative set. The 25¢ stamp featured Cooper in the title role of the 1939 film Beau Geste (2447).

Gary Cooper was born Frank James Cooper in Helena, Mont. He moved to Los Angeles in 1923 and found work as a Hollywood extra, but before long he was a featured player in popular big-budget westerns.

The U.S. Postal Service described Cooper as "the all-American hero whose believable performances and strong, silent appeal brought him a lifetime of fame."