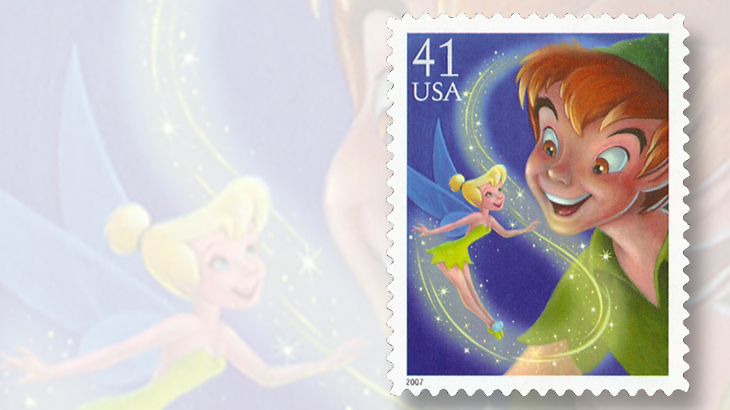 Peter Pan is shown at right with his companion Tinkerbell on a 2007 U.S. stamp. Scottish author J.M. Barrie created the Peter Pan story.

The author popularly known as J.M. Barrie, the creator of Peter Pan, was born James Matthew Barrie in Kirriemuir, Scotland, on May 9, 1860.

Barrie studied at the University of Edinburgh and began writing for newspapers before publishing his earliest novels in the late 1880s. After completing several books and short stories, Barrie turned his attention to writing plays.

A 1902 novel titled The Little White Bird (or Adventures in Kensington Gardens) introduced a character named Peter Pan. Barrie developed the character for a successful play that was performed two years later, Peter Pan (or the Boy Who Wouldn’t Grow Up).

Barrie continued to find success with plays, but adapted his Pan story as a novel, Peter Pan and Wendy, that was published in 1911.

As a philanthropic gesture, Barrie donated the copyright to Peter Pan to Great Ormond Street Hospital, which still benefits from the gift.

The story of Peter Pan and his adventures in Neverland have been adapted in numerous films, including a 1953 animated feature by Disney. The Disney version of the boy who would never grow up is featured on a 41¢ stamp from a 2007 United States set titled The Art of Disney: Magic (Scott 4193).

Barrie and his characters have been honored on stamps from other countries as well, including New Zealand, Alderney and Palau.