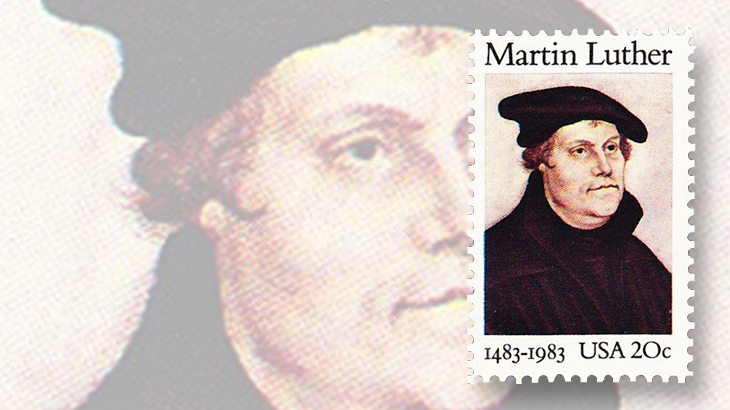 The choice of subject was an unusual one for the Postal Service, which generally avoids religious themes on commemorative stamps, and usually selects subjects with a strong connection to the United States, which didn’t even exist by that name during Luther’s lifetime.

The USPS Postal Bulletin for Oct. 6, 1983, stated, “Luther made significant contributions to universal education, freedom of religion and expression, freedom of the press and the expansion of knowledge through the translation of Latin into the vernacular and the printing of books. This postage stamp was issued to commemorate his role in the growth of western civilization.”

Luther was a monk and a teacher of theology in the Catholic Church that dominated Europe, but he challenged the church’s activities with the publication of his Ninety-Five Theses in 1517. He was subsequently threatened with excommunication, which finally occurred in 1521.

Luther’s writings and teachings contributed significantly to the rise of the Protestant Reformation and the establishment of the Lutheran Church. He is a controversial figure for his later diatribes against Catholics, Jews and others (writings which have been disavowed by Lutheran leaders), but he also translated the Bible into the German vernacular, making it more widely accessible.