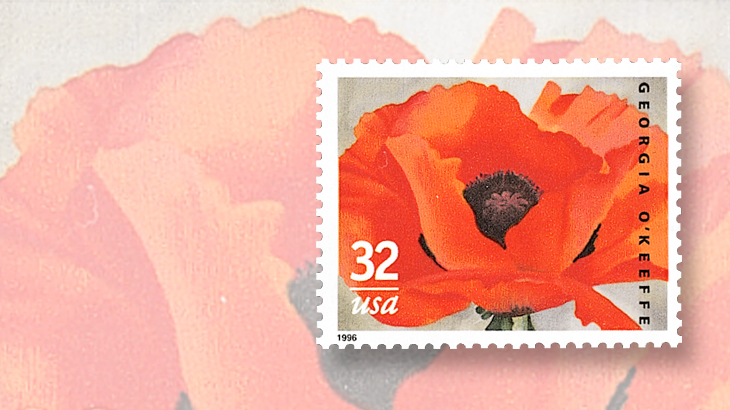 Artwork by Georgia O'Keeffe is featured on the 32¢ commemorative stamp from 1996 honoring her.

Though often associated with the New Mexico landscapes that she painted, Georgia Totto O’Keeffe was born Nov. 15, 1887, near Sun Prairie, Wis.

As a young girl, O’Keeffe exhibited an affinity for art and studied locally. In 1905 she attended the School of the Art Institute of Chicago, and then moved to New York City two years later, studying at the Art Students League of New York. She also attended the University of Virginia and Columbia University.

Some of her early drawings would be exhibited by the photographer Alfred Stieglitz at his gallery in 1916; he married O’Keeffe in 1924. She became a frequent subject of his photographs, and he promoted her work in the New York art world, including a series of Manhattan architectural pieces.

Following his death in 1946, O’Keeffe moved to New Mexico and created new paintings of the Southwest, depicting desert landscapes, bones and animal skulls, expansive skies and colorful flowers. She also painted abstractions and created sculpture in her later years.

A 32¢ stamp showing O’Keefee’s painting titled Red Poppy, 1927 is featured on a commemorative stamp issued May 23, 1996. United States Postal Service policy at that time stated that no postal items honoring individuals would be issued sooner than 10 years after the individual’s death (with the exception of U.S. presidents).

The Georgia O’Keeffe stamp (Scott 3069) was issued 78 days following the 10-year anniversary of her death.