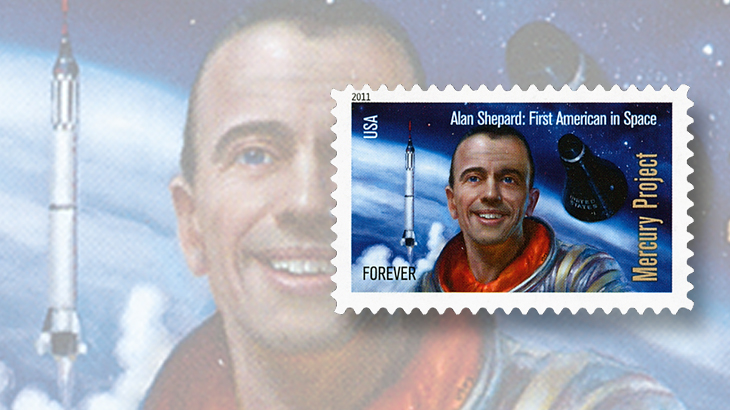 The forever stamp honoring American astronaut Alan Shepard (Scott 4527) was issued May 4, 2011, in a set of two stamps that also honored the Messenger Mission that sent the first spacecraft to orbit Mercury.

Alan Bartlett Shepard, Jr., was born Nov. 18, 1923, in East Derry, N.H. He graduated from the United States Naval Academy in 1944 and served in the Pacific on the Fletcher-class destroyer USS Cogswell during World War II.

He attended the U.S. Navy Test Pilot School at Patuxent in 1950 and was involved in testing and developing aircraft for several years.

In 1959, Shepard was named to the NASA Mercury program, and he became the first American to travel into space on May 5, 1961, in the Freedom 7 spacecraft. After his 15-minute sub-orbital flight, he returned to a hero’s welcome and a ticker-tape parade.

Grounded for several years because of an inner ear disorder, Shepard was designated as chief of NASA’s Astronaut Office. The inner ear affliction was surgically corrected in 1968, and Shepard embarked on his second space flight on Jan. 13, 1971, as spacecraft commander of Apollo 14.

At 47 years old, Shepard became the oldest person to walk on the moon. He’s also known for being the only person to drive a golf ball on the lunar surface.