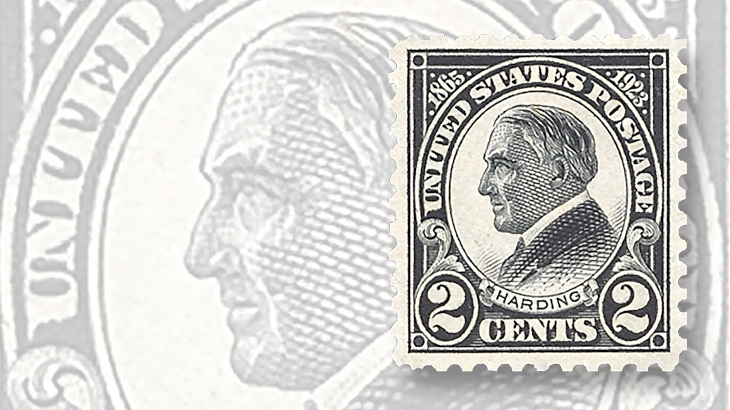 The 2¢ Warren G. Harding memorial stamp was issued Sept. 1, 1923, less than one month after the president's death on Aug. 2.

The 29th president of the United States, Warren Gamaliel Harding, was born 150 years ago on Nov. 2, 1865, in Blooming Grove, Ohio, a little community between Columbus and Cleveland.

Harding’s single term as president was shorter than most because he died of undetermined causes just two years and five months after taking office.

Even so, during that relatively brief time his administration became steeped in scandals, most of which did not come to light until after Harding’s death. Harding’s defenders point out that the president himself was not implicated in the improprieties, but his critics counter that those who were implicated were friends and officials that he nominated and appointed.

Harding was elected president in 1920 after a career as a newspaper publisher and civic leader. A committed Republican, he served in the state senate and as Ohio’s lieutenant governor. In 1914 he was elected to represent Ohio in the U.S. Senate.

During his presidency, America’s postwar economy improved and Harding sought an expansion of the nation’s highway system and the passage of anti-lynching legislation.

Harding embarked on a speaking tour of the Western states in 1923, including a visit to Alaska, and the busy schedule wore away at his health. On the evening of Aug. 2, resting in bed at a hotel with his wife in the room, he suffered convulsions and died. No autopsy was performed, and the cause of the president’s death has been reported as cerebral hemorrhage by some, and as a heart attack by others.

Hints of scandal began emerging while Harding was still alive, and his learning of them may have contributed to his declining health. Government officials were implicated for graft in the Veterans’ Bureau, and for bribery in the Teapot Dome oil lease scandal. In the latter affair, Interior Secretary Albert B. Fall was eventually convicted on bribery charges and imprisoned.

Still, after the president’s death he was mourned throughout the country, and a memorial stamp was quickly prepared in the format of the 1922 Fourth Bureau Issue, which honored presidents and other historical figures. The first of numerous Harding stamps from this era was the 2¢ black Harding issued Sept. 1, 1923 (Scott 610), less than one month after the president’s death at age 57.