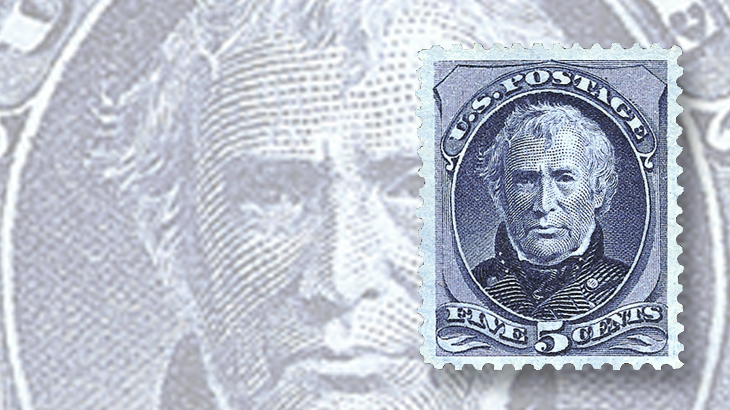 The first U.S. stamp to honor President Zachary Taylor was issued in 1875, 25 years after his sudden death in office.

The 12th president of the United States, Zachary Taylor, was born Nov. 24, 1784, near Barboursville, Va., but he was raised on a Kentucky plantation.

Taylor would become a career military man, joining the U.S. Army in 1808, the year his second cousin, James Madison, was elected as the nation’s fourth president.

During the War of 1812, Taylor took command of Fort Harrison in Indiana Territory, defending it from Indian attack. He would later fight in the Black Hawk War (1832) and the Second Seminole War (1835-42).

As a brigadier general at age 62, Taylor successfully engaged Mexican forces in the 1846-47 Mexican-American War, including a victory over Mexican General Antonio Lopez de Santa Anna.

Taylor had a homespun manner and was an able and involved military leader, earning him the nickname “Old Rough and Ready.”

He was a widely admired war hero when the Whig party chose him as its presidential candidate in the election of 1848. His opponents were two former members of the Andrew Jackson administration: the Democratic candidate Lewis Cass, who had served as Jackson’s Secretary of War; and the Free Soil candidate, Martin Van Buren, who was Jackson’s vice president, and who had already served one term as president from 1837 to 1841.

Taylor won the election, taking office on March 4, 1849, as the question of slavery divided the nation. A slave owner himself, Taylor angered Southern slave-holding supporters when he proposed admitting California and New Mexico as states, as the residents of those regions were expected to reject slavery in their state constitutions, creating a majority of free states in the Senate. Taylor condemned secessionist threats that followed, but then the unexpected happened: the president died in office on July 9,1850.

The death of the vigorous president came five days after he fell ill with apparent gastroenteritis following a July 4 ceremony in sweltering heat to lay the cornerstone of the Washington Monument.

Taylor was succeeded by his vice president, Millard Fillmore.

Zachary Taylor was honored on a 5¢ blue stamp issued in June 1875 (Scott 179), making him the fifth president depicted on a stamp after Washington, Jefferson, Jackson and Lincoln.