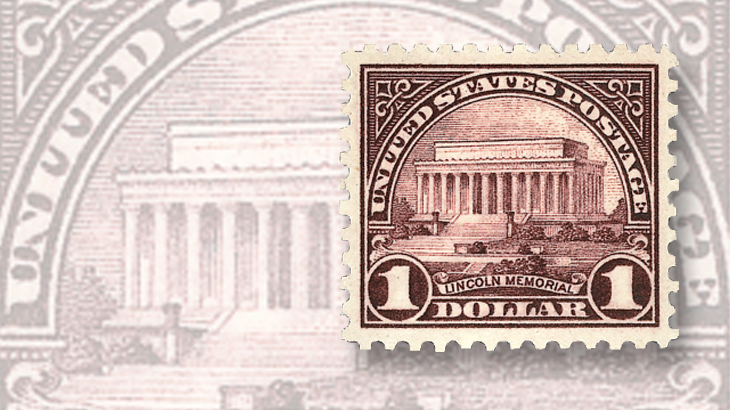 The 1923 $1 definitive stamp shows the Lincoln Memorial, which was designed by Henry Bacon.

The Lincoln Memorial, which stands at the west end of the National Mall in Washington, D.C., was completed in 1922 as a tribute to the nation’s 16th president, Abraham Lincoln.

While there were many artists and craftsmen involved in creating the memorial, the architect who designed the familiar structure was Henry Bacon, who was born Nov. 28, 1866, in Watseka, Ill.

Bacon studied at the University of Illinois, Urbana, and worked as a draftsman in New York City. After winning a scholarship, Bacon traveled overseas and studied the details of classical structures in Europe.

When he returned to New York City, Bacon became involved in designing for the World’s Columbian Exposition. His first commission was the fair’s Pennsylvania Railroad Building.

After 20 years of success as an architect, Bacon was selected in 1911 to design the Lincoln Memorial. According to the National Park Service, “His true inspiration was the Athenian temple known as the Parthenon. What better way existed to remember a man who struggled to defend democracy, than to model his tribute after one found in the birthplace of democracy?”

The statue of Lincoln dominating the memorial was the work of sculptor Daniel Chester French, a longtime associate of Bacon’s.

Following cancer surgery, Bacon died Feb. 26, 1924, not long after the memorial was completed.