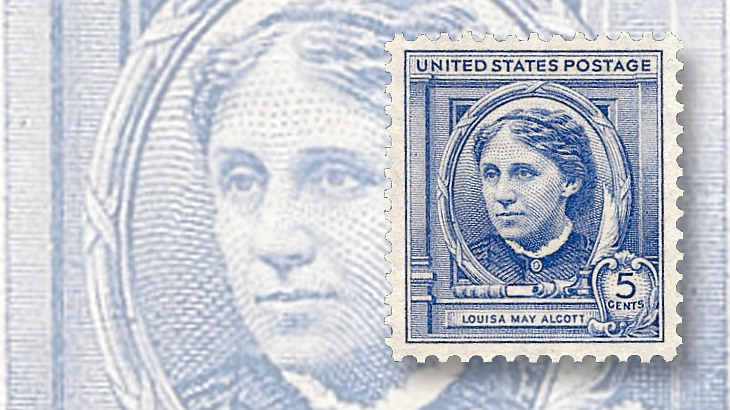 A 5¢ blue stamp honoring Louisa May Alcott was issued in 1940 as part of the Famous Americans series.

Louisa May Alcott was born Nov. 29, 1832, in Germantown, Pa., but she lived nearly all of her life in the area near Boston, Mass. The second of four children in the family — all girls — as an adult she would find great fame as the author of Little Women and other novels and short stories.

Her parents were acquainted with many important writers of their time, including Ralph Waldo Emerson, Julia Ward Howe and Henry David Thoreau, but her father’s efforts to support the family were largely unsuccessful. Louisa worked as a governess and teacher, but also found success as a writer.

The family supported the abolitionist movement, and Louisa was also a proponent of women’s rights. She published some early adult works using the pseudonym A.M. Barnard, but also began writing for children.

During the Civil War she served for several weeks as a nurse, but became seriously ill after contracting typhoid. Some of her early work published during this period found an appreciative readership in publications including Atlantic Monthly.

The first volume of Little Women was completed in 1868. It tells the story of four sisters, loosely based upon the four girls of the Alcott family. The second and final volume was created the following year. The story was immediately successful and brought fame to Alcott, inspiring the sequels Little Men in 1871 and Jo’s Boys in 1886.