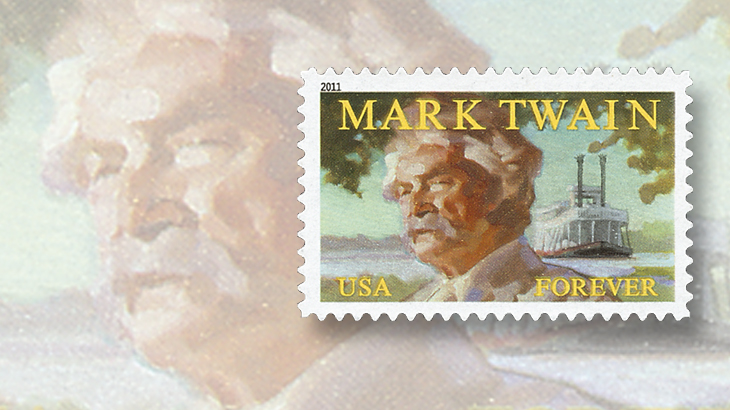 From the 1860s until his death in 1910, Twain published a long string of successful novels, short stories and essays, including The Adventures of Tom Sawyer, The Adventures of Huckleberry Finn and A Connecticut Yankee in King Arthur’s Court.

The Clemens family moved some 40 miles east to Hannibal when Twain was just four years old. When his father John, a merchant, died eight years later, Twain sought work as an apprentice printer for a local newspaper to help the struggling family make ends meet.

Within a few years he was writing stories and articles for the Hannibal Journal, working alongside his older brother Orion.

Living in Hannibal, Twain was familiar with the great steamboats that traveled the river.

“When I was a boy,” Twain wrote in Life on the Mississippi, “there was but one permanent ambition among my comrades in our village on the west bank of the Mississippi River. That was, to be a steamboatman.”

Twain achieved that ambition, working as a riverboat pilot during the 1850s. When the outbreak of the Civil War brought a halt to commerce on the river, Twain served briefly with a Confederate militia that disbanded after just two weeks.

Soon after, he traveled to the American West, where he prospected for silver and gold in Nevada with Orion and joined the staff of the Territorial Enterprise, a newspaper in Virginia City, Nev.

It was there that he began writing under the pen name Mark Twain, which most sources relate to a phrase used in his piloting days to denote a depth of two fathoms, or 12 feet. The call “mark twain” means “mark number two” on the line measuring the river depth.

An alternate claim suggests that Twain’s name came from his penchant for ordering two drinks in his favorite saloon and instructing the barkeep to “mark twain” on his tab.

Always on the move, Twain traveled to California, where he continued to contribute articles and sketches to newspapers. As a correspondent, he visited Hawaii, Europe and the Holy Land.

Twain’s first book, The Celebrated Jumping Frog of Calaveras County, was published in 1867 with little notice, but just two years later, his travel letters, previously published in San Francisco and New York newspapers, were collected and published as The Innocents Abroad, which became a popular bestseller.

In 1870, Twain married Olivia L. Langdon, and the couple moved to Hartford, Conn., the following year. Together they would have four children, though three of the children and their mother would die while Twain was still living.

In Hartford, Twain wrote some of his most famous works, including The Adventures of Tom Sawyer in 1876, The Prince and the Pauper in 1882, Life on the Mississippi in 1883 and The Adventures of Huckleberry Finn in 1884.

Though often described as a humorist, Twain in his writings addressed many serious subjects of his time, including slavery and bigotry, social reform, religion, government inefficiencies and human selfishness.

His travel essays, including Roughing It (1872), A Tramp Abroad (1880) and Following the Equator (1897) also were well loved by his worldwide audience.

While Twain achieved remarkable fame and success in his lifetime, misadventures in business and investments brought him near financial ruin in the 1890s. He embarked on international lecture tours that helped restore him financially and further grow his fame.

As a pioneering American novelist and satirist, Twain would influence an untold number of future writers, including William Faulkner, Thomas Wolfe and Ernest Hemingway.

In reporting the death of novelist Kurt Vonnegut in 2007, The New York Times noted, “Like Mark Twain, Mr. Vonnegut used humor to tackle the basic questions of human existence.”

His prediction came true. Twain died April 21, 1910, and was buried beside his wife and children in the Woodlawn Cemetery in Elmira, N.Y.

The connection to Halley’s Comet was memorialized by the U.S. Postal Service in 1985 to mark Twain’s 150th birth anniversary in combination with the 1986 return of the comet to the inner solar system. A 36¢ aerogram issued Dec. 4, 1985 (Scott UC60) shows the comet tail on the imprinted stamp, along with a portrait of Twain and his quote about the comet as a printed cachet.

Huckleberry Finn would reappear on a 29¢ U.S. stamp issued Oct. 23, 1993 (Scott 2787) as part of a four-stamp set commemorating classic books. The stamp’s central image shows Huck with a fishing pole over his shoulder, gazing at a steamboat on the Mississippi.

Earlier U.S. stamps related to Twain include the 8¢ Tom Sawyer stamp of 1972 (Scott 1470), with its scene by American artist Norman Rockwell of two boys and a half-painted picket fence, and a 10¢ stamp issued in 1940, honoring Twain as Samuel L. Clemens and showing a portrait of the author as part of the Famous Americans issue (863).

Most recently, Twain was honored on a commemorative forever stamp issued June 25, 2011 (Scott 4545).