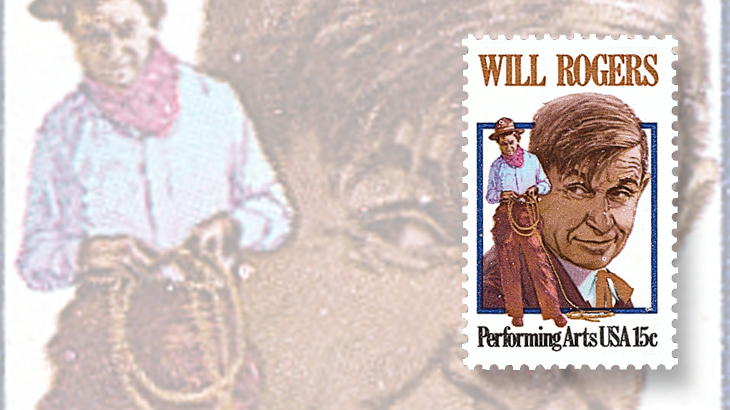 A 15¢ commemorative stamp honoring Will Rogers was issued on his birth centenary, Nov. 4, 1979.

Will Rogers was named after Cherokee leader William Penn Adair.

As a young man, Rogers worked as a rancher and traveled to South America and Africa before returning to the United States and finding success as an entertainer on the vaudeville circuit.

He perfected tricks with his lariat, and branched out to share his homespun humor and observations. As his fame grew he appeared in silent films and started writing a newspaper column. Soon he was one of the best-loved personalities in America.

His amusing observations of human foibles included the government and common folk, such as “Too many people spend money they haven’t earned to buy things they don’t want to impress people they don’t like.”

But his genial nature was reflected in his self-penned epitaph: “I never met a man I didn’t like.”

Rogers, an enthusiastic advocate for advancing aviation, was on an aerial tour with pilot Wiley Post in 1935 when the plane they were flying in crashed in a lagoon near Point Barrow, Alaska. Both men were killed; Rogers was 55 years old.