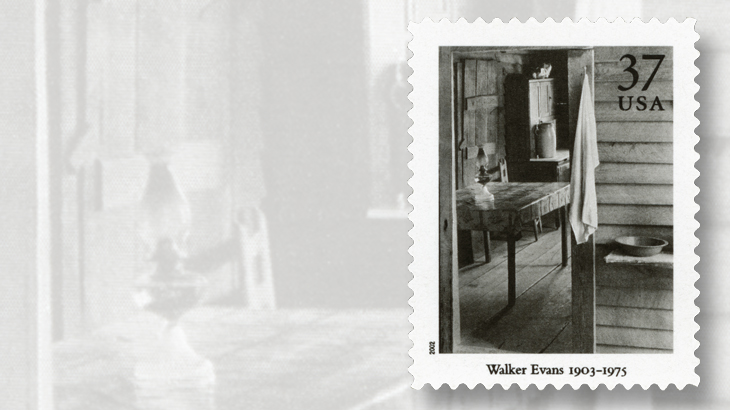 Walker Evans is one of 20 photographers commemorated in 2002 on 37¢ stamps.

American photographer Walker Evans was born Nov. 3, 1903, in St. Louis, Mo. Initially intending to become a writer, he took up photography in 1928 after returning from a year in Paris.

In the midst of the Great Depression in the United States, Evans accepted assignments recording images of people and rural scenes for the Resettlement Administration, later the Farm Service Administration, a government relief agency of President Franklin Roosevelt’s New Deal program. In later years he worked as both a photographer and an editor.

Evans is commemorated on a 37¢ stamp in the Masters of American Photography set of 20 issued June 13, 2002 (Scott 3649m). The 1936 black and white photograph reproduced on the stamp is titled Washroom and Dining Area of Floyd Burroughs’ Home, Hale County, Alabama.

A capsule biography of Evans and his work is printed on the liner paper to which the stamp is affixed.

“Walker Evans (1903-1975) found beauty in the commonplace and turned documentary photography into an art form. Made during the summer of 1936, his now classic photographs of three sharecroppers, their homes, and their families — which were published in the eloquent book Let Us Now Praise Famous Men — are emblematic of how we have come to visualize the austerity of the Great Depression.”