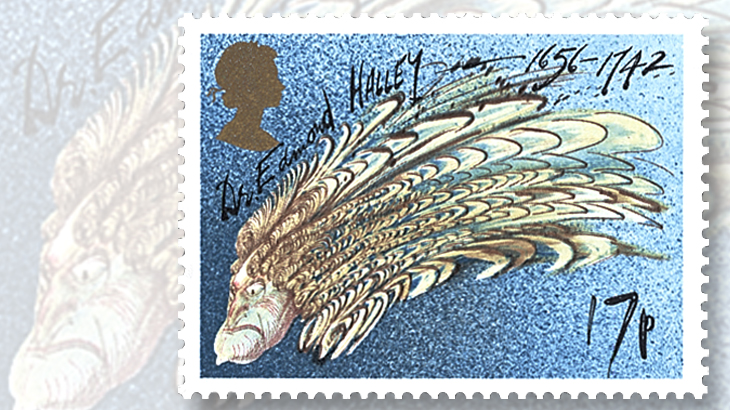 Edmond Halley is portrayed as part of the comet that bears his name, on this 17-penny stamp from Great Britain's Royal mail, issued Feb. 18, 1986.

Astronomer Edmond Halley, famous for the comet he accurately predicted would appear in 1758 (and which now bears his name) was born Nov. 8, 1656, in Haggerston, an area of East London, England.

Through his telescope, Halley observed the approaching comet in November 1682, and in 1705 he would determine that the comet he saw 23 years earlier was the same that had been noted in historic reports from 1531 and 1607. Halley believed that this comet returned to our solar system every 76 years, and predicted its next appearance would come in 1758.

Halley died in 1742, but the comet he observed did return, and was first spotted from Earth in December 1758. It was named after the astronomer the following year, and has been known as Halley’s Comet (or Comet Halley) ever since.

The most recent appearance of Halley’s Comet came in February 1986, and on Feb. 18, 1986, Great Britain’s Royal Mail issued a set of four stamps honoring the astronomer and commemorating the reappearance of the comet. The 17-penny stamp (Scott 1133) features a fanciful caricature of Edmond Halley in the guise of the comet. The illustrations for this stamp and the other three in the set were created by artist Ralph Steadman.