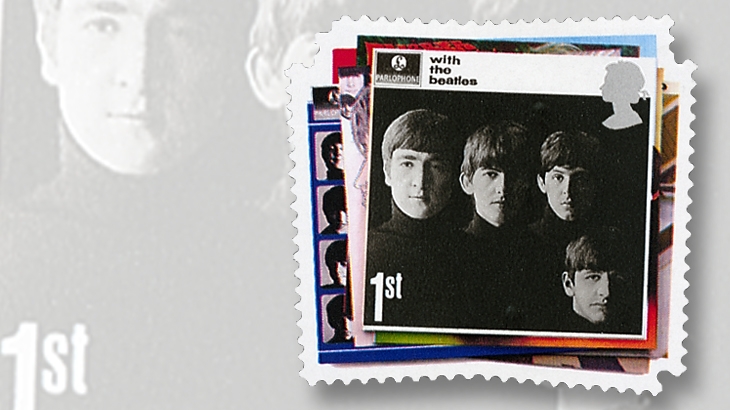 John Lennon is pictured at left on the cover of the record album With the Beatles. The album cover is featured in the design of a 1st-class British stamp issued in 2007.

Singer, songwriter, musician, and artist John Lennon reached an extraordinary level of worldwide fame as a member of the Beatles in the 1960s, when he was only in his 20s. His songwriting partnership with Paul McCartney produced many of the most enduring songs of the rock era, and following the group's breakup, Lennon embarked on a successful career recording as a solo artist.

Born John Winston Lennon on Oct. 9, 1940, in Liverpool, England, Lennon was raised primarily by his aunt, Mimi Smith. He had contact with his mother, Julia, but almost none at all with his father, Alfred.

Lennon’s hobbies as a child included stamp collecting and drawing, and he attended the Liverpool College of Art in the 1950s. In 1956, he was given a guitar by his mother, who died in a traffic accident one year later. Lennon formed a music group known as the Quarrymen, and asked another young musician, Paul McCartney, to join.

By 1962, the group’s name was changed to the Beatles, and the lineup included lead guitarist George Harrison and drummer Ringo Starr. Lennon and McCartney teamed up to write many of the Beatles’ greatest hits, though some that were credited to both songwriters were written primarily by either one or the other. Among the songs made famous by the Beatles that have been attributed to Lennon are Help, All You Need is Love, Ticket to Ride and Strawberry Fields Forever.

Following the breakup of the Beatles in 1970, Lennon found success as a solo artist with the singles Power to the People and Imagine in 1971, and later albums including Mind Games (1973), Walls and Bridges (1974), and Double Fantasy (with Yoko Ono, in 1980).

Lennon was shot and killed at age 40 outside of the Manhattan apartment building where he lived on the evening of Dec. 8, 1980. His sons Julian (born in 1963) and Sean (born in 1975) are both musicians.

As a member of the Beatles, John Lennon has been honored on stamps issued by many countries around the world. His first postal honor from Royal Mail of Great Britain was a small portrait (alongside William Shakespeare) on a 34-penny stamp honoring the Australian bicentennial in 1988 (Scott 1225).

In 2007, a more direct commemoration celebrated the Beatles on 10 British stamps, including six that show some of the group’s most popular albums. With the Beatles is pictured on a nondenominated 1st-class stamp for letter mail (Scott 2421).