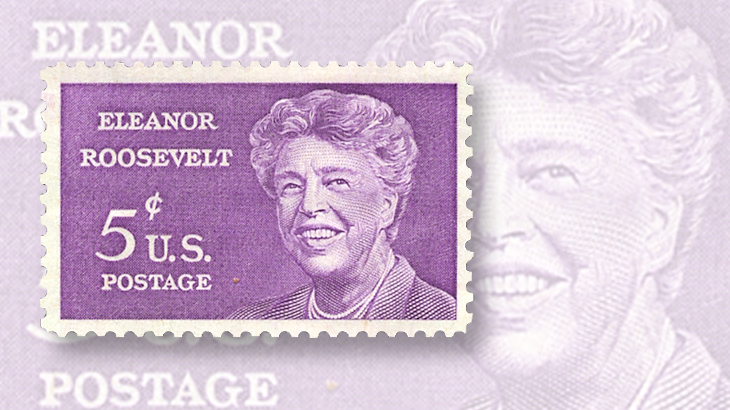 First lady Eleanor Roosevelt was commemorated on a 5¢ stamp issued in 1963, less than one year after her death.

A 5¢ commemorative stamp honoring Eleanor Roosevelt was issued Oct. 11, 1963 (Scott 1236), on what would have been her 79th birthday. Roosevelt had died of heart failure just 11 months earlier, and her funeral was attended by President John F. Kennedy and former presidents Harry S. Truman and Dwight D. Eisenhower.

Born Anna Eleanor Roosevelt in New York City on Oct. 11, 1884, she is remembered as the wife of President Franklin D. Roosevelt, but her own public service and her efforts in support of human rights and the United Nations brought her admiration from around the world.

She met Franklin Roosevelt, her fifth cousin once removed, in 1902, and they married three years later. They had six children, though a son named Franklin, born in 1909, died of heart disease before reaching his first birthday.

Eleanor was a strong supporter of her husband’s political ambitions as he served as a New York state senator, assistant Secretary of the Navy, governor of New York and, beginning in 1933, the longest-serving president of the United States, an office he held until his death on April 12, 1945.

Their marriage suffered when Eleanor, in 1918, reportedly learned of Franklin’s romance with another woman, but they remained together in a working partnership that benefited them both.

As first lady during the Great Depression and World War II, Eleanor was admired by many for her public appearances and her frequent columns in newspapers and magazines. She was also a strong and visible supporter of African-American civil rights.

After Franklin’s death, Eleanor encouraged U.S. membership in the United Nations, and chaired the U.N. commission on human rights. President Kennedy appointed her to the National Advisory Committee to the Peace Corps. Her lengthy autobiography was published two years before her death.