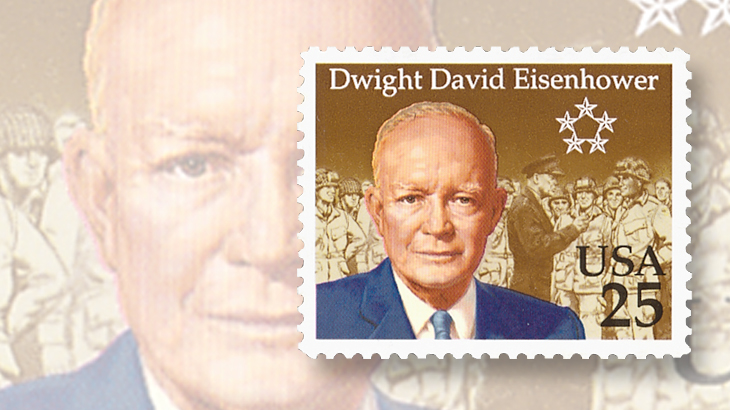 President Dwight D. Eisenhower was commemorated on a 25¢ stamp for his birth centenary, Oct. 13, 1990.

The Eisenhower family moved to Abilene, Kan., in 1892, where Dwight Eisenhower, known by the nickname “Ike,” graduated from Abilene High School in 1909. Two years later, he entered the United States Military Academy at West Point, where he graduated in 1915.

Though he aspired to serve in the cavalry corps and actively sought an overseas assignment before and during World War I, Eisenhower was stationed in Texas, training infantry troops.

As America entered World War II, Eisenhower was promoted to brigadier general and commanded America’s war efforts in the Far East before leading a campaign in North Africa. By 1943 Eisenhower was named supreme commander of Allied Expeditionary Forces, and he led the June 6, 1944, Normandy invasion.

Despite never holding public office, the widely admired war hero was nominated as the Republican candidate for president in the 1952 election, which he won by defeating Democrat Adlai Stevenson in a landslide.

Eisenhower served two full terms as president. His first term saw the signing of the 1953 armistice ending the Korean War. Efforts by Eisenhower to contain a nuclear arms race with the Soviet Union were largely unsuccessful, however, and the ensuing Cold War between the two superpowers would drag on for decades.

Eisenhower furthered efforts to extend civil rights to black Americans by enforcing school integration and through civil rights acts proposed to Congress and signed into law. A major accomplishment was Eisenhower’s push to develop the nation’s interstate highway system.