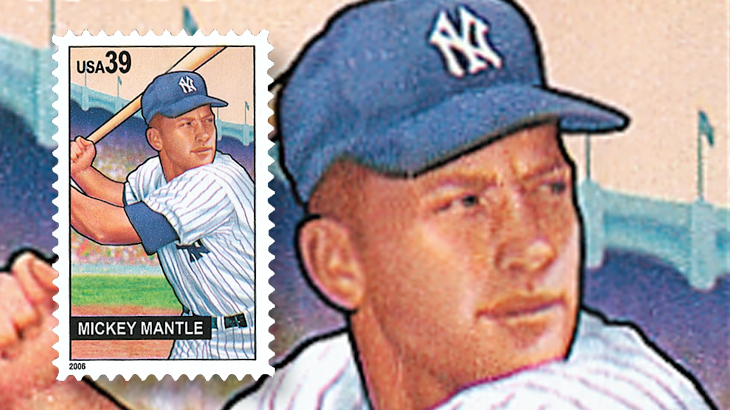 Mickey Mantle, one of baseball's most powerful sluggers, is commemorated on a 39¢ stamp issued in 2006.

Baseball star Mickey Mantle was born Oct. 20, 1931, in Spavinaw, Okla. He was named after the great baseball catcher Gordon “Mickey” Cochrane, who was playing for the Philadelphia Athletics the year Mantle was born.

Known for much of his career as “The Mick,” the switch-hitting Mantle wore No. 7 for the Yankees for 18 exceptional seasons, from 1951 to 1968. He played in 12 World Series and 16 All-Star Games, accumulating a .298 career batting average with 536 home runs.

In a game against the Washington Senators on April 17, 1953, Mantle hit a home run an estimated 565 feet, which today is still considered the longest home run in major league history.

In 1957 he batted a ferocious .365 and was named the American League’s Most Valuable Player. He was also a solid defensive player, winning the Golden Glove in 1962.