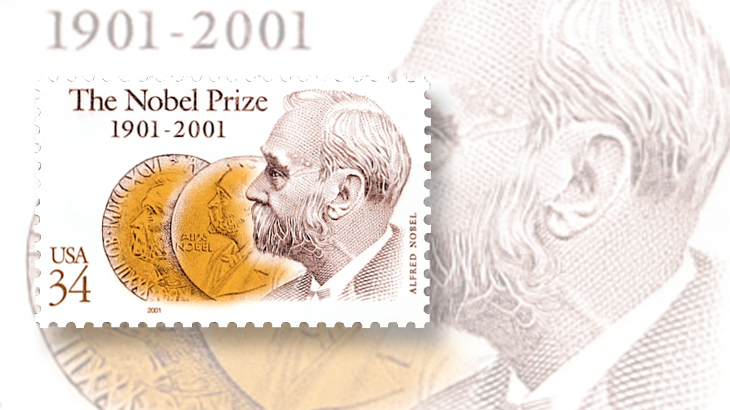 Two different Nobel Prize medals are shown with a portrait of Alfred Nobel on this 34¢ commemorative from 2001.

Scientist and inventor Alfred Nobel was born Oct. 21, 1833, in Stockholm, Sweden. He may be best known for establishing the philanthropic Nobel Prize awards that came into existence after his death.

In his will, Nobel outlined the foundation for the awards to recognize achievements in physics, chemistry, medicine, literature, and peace. When he died in 1896, he left a $9 million legacy to fund the Nobel Prizes — an amount that today would be equal to about $265 million.

The Nobel Foundation in Stockholm manages the assets, and the prize winners are selected by various bodies as described in Nobel’s will. Each Nobel laureate receives his prize from Sweden’s reigning monarch, though the Nobel Peace Prize is awarded in Norway at Oslo City Hall in a ceremony overseen by Norway’s king.

Nobel’s father was a successful manufacturer of land mines and war materiel. During the 1850s, Nobel began working with explosives, including nitroglycerine, to create controllable explosions. By the time he was 30, Nobel had registered his first patent. He eventually would hold 355 patents.

By combining a blasting cap of his own invention with nitroglycerine, Nobel created a usable explosive that was soon in great demand. He set up factories throughout the world and accumulated great wealth. His invention of dynamite was an important factor in the Industrial Revolution.