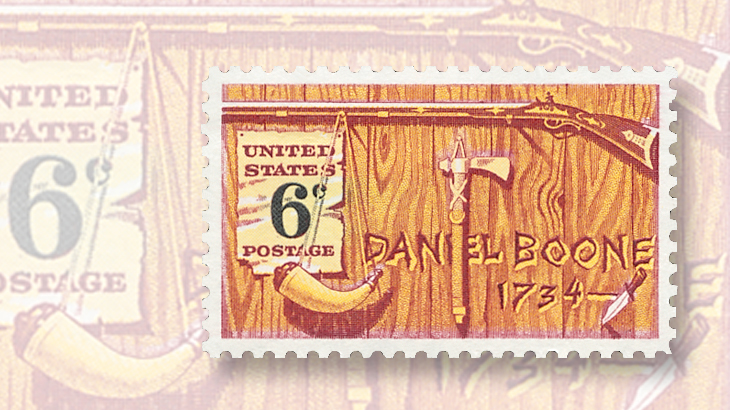 The birthdate of American frontiersman Daniel Boone is generally listed as Oct. 22, 1734, though some references cite Nov. 2.

Originally from Berks County, Pa., Boone was the sixth of 11 children. With a wandering nature, he traveled with his family to North Carolina in 1750, and fought during the early years of the French and Indian War (1754-63).

In 1756 Boone married Rebecca Bryan; the couple had 10 children.

Boone was instrumental in exploring and settling Kentucky. He traveled there with other settlers in 1769, and would lead the effort to carve out the Wilderness Road through the Cumberland Gap, opening the region for new settlements.

The first settlers established Boone’s Station (later Boonesborough), and Boone moved there with his family in 1775.

As a militia officer during the Revolutionary War, Boone was captured by Shawnees and adopted, but he escaped after five months and returned to his family.

After serving in the Virginia legislature, Boone moved to Missouri. Books written about his frontier adventures and pioneering spirit brought him fame during his lifetime. He died Sept. 26, 1820.

Sept. 26 was chosen as the issue date for a 6¢ commemorative stamp honoring Boone in 1968 (Scott 1357). The design, according to the U.S. Post Office Department, shows “the tools of Boone’s trade — a Pennsylvania rifle, a powder horn and a knife.” A pipe tomahawk is also depicted, “a historical reminder that Boone had been adopted by the Shawnees.”