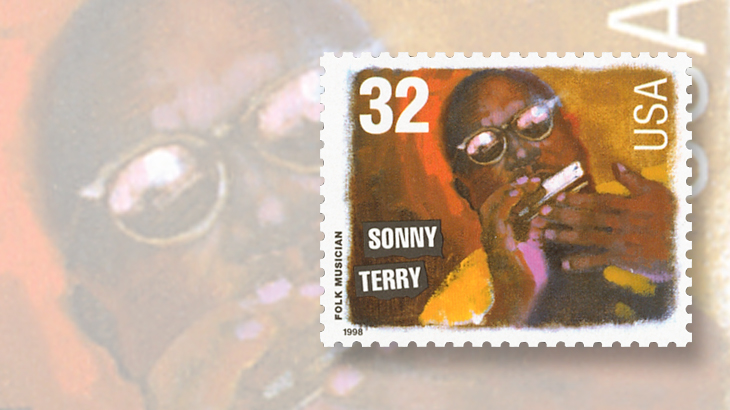 Folk and blues musician Sonny Terry, commemorated on a 32¢ stamp in 1998.

Folk and blues musician Sonny Terry, one of America’s premier harmonica artists, was born Saunders Terrell on Oct. 24, 1911. His birthplace has been reported as Greensboro, Ga., and as Greensboro, N.C.

Terry lost his sight after two different childhood accidents. His father taught him to play the harmonica, and Terry would later team up with other musicians, including guitarists Brownie McGhee and Leadbelly.

During the 1940s Terry traveled the folk club circuit and began recording. Though Terry was known and respected as a solo artist, Terry and McGhee performed regularly as a duo and created numerous recordings together.

Terry’s signature “whoopin’” style of blues harmonica made him among the most respected musicians in the field.

In 1946, Terry was cast in the Broadway production of Finian’s Rainbow. He continued performing and recording for many years after that, often with McGhee.

Terry died in 1986, shortly before he was inducted into the Blues Foundation’s Hall of Fame.