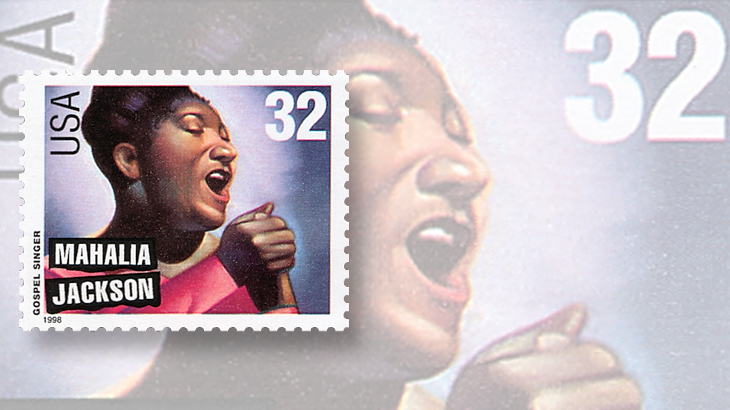 Gospel singer Mahalia Jackson was born Oct. 26, 1911, in New Orleans, La., and sang in the Baptist church choir. She moved to Chicago at age 16 and soon after joined a professional gospel group. She was devoted to gospel music, but her vocal style also showed influences of the great blues singers Bessie Smith and Ma Rainey.

She toured with gospel composer Thomas A. Dorsey and began recording in the mid 1930s. One of her best known songs is Dorsey’s Take My Hand, Precious Lord, which she would perform years later at the 1968 funeral of Martin Luther King Jr.

Jackson’s popular recordings included You’ll Never Walk Alone, Every Time I Feel the Spirit, How I Got Over and many others. She sang at President John F. Kennedy’s inaugural ball in 1961, and at the March on Washington for Jobs and Freedom in 1963.

Jackson received four Grammy Awards during her lifetime, a Grammy Lifetime Achievement Award shortly after her death in 1972, and another Grammy for Best Soul Gospel Performance in 1976.

She was commemorated on a 32¢ postage stamp issued July 15, 1998 (Scott 3216), in the Gospel Singers set of the Legends of American Music series.