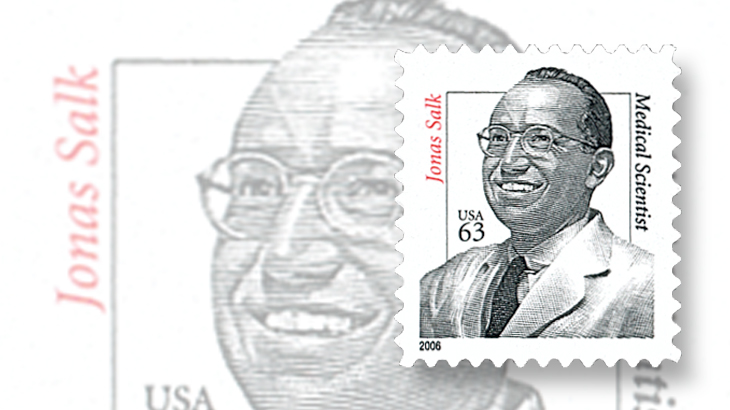 The first stamp to pay tribute to Dr. Jonas Salk and others who sought to end the scourge of polio was issued Jan. 15, 1957, when Salk was 42 years old.

The 3¢ red lilac commemorative (Scott 1087) was inscribed “Honoring those who helped fight polio.” Salk was a leader of that fight, and the U.S. Post Office Department said the stamp symbolized the achievement “by the American people and the medical and scientific professions in bringing forth an effective vaccine to prevent paralytic polio.”

It was there that Salk developed his polio vaccine. According to the Salk Institute for Biological Studies, Salk used formaldehyde to kill the polio virus, which was kept intact in the vaccine to trigger the necessary immune response.

The successful injected vaccine was introduced in 1955. An oral vaccine with a weakened live virus was developed by Albert Sabin within a few years, and the administration of the two greatly reduced the number of polio victims in the United States and worldwide almost immediately.

Salk died in 1995. A 33¢ stamp captioned “Polio Vaccine Developed” was issued in 1999 as part of the Celebrate the Century series (Scott 3187a). An inscription on the back of the stamp acknowledged the work of Jonas Salk to stem the polio epidemic.