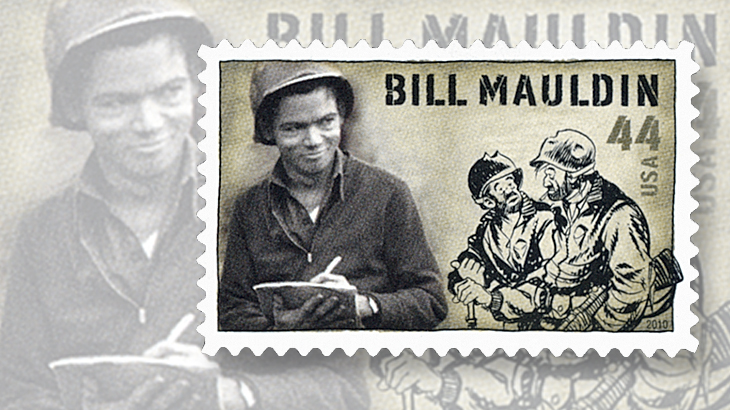 Political cartoonist Bill Mauldin was honored on a 44¢ commemorative stamp issued in 2010.

The 44¢ stamp honoring editorial cartoonist Bill Mauldin (Scott 4445) shows the artist as a 22-year-old soldier, in a photograph taken in Italy during World War II. Featured on the right half of the 2010 stamp are Mauldin’s famous wartime characters, Willie and Joe, two infantry soldiers whose day-to-day experiences and observations were conveyed with Mauldin’s dry humor, entertaining the soldiers who shared those experiences, and the civilian audiences back home.

William Henry Mauldin was born Oct. 29, 1921, in Mountain Park, N.M. He taught himself how to draw as a youngster, and later moved to Chicago where he attended the Chicago Academy of Fine Arts.

By 1940 the 19-year-old Mauldin was in the Army, serving with the 45th Infantry Division and using his skills to create cartoons for the division’s newspaper. When Mauldin served in Europe during the war, Willie and Joe showed up regularly in Stars and Stripes and became a favorite feature for the GIs serving in the European Theater.

“The only way I can try to be a little funny is to make something out of the humorous situations which come up even when you don’t think life could be any more miserable,” Mauldin once wrote.

His cartoons won the Pulitzer Prize in 1945, the year Mauldin published Up Front, a hugely popular book that combined many of his Willie and Joe cartoons with additional stories and observations.

After the war Mauldin did some freelance work before joining the St. Louis Post-Dispatch in 1958 as a political cartoonist. He won another Pulitzer the following year and moved to the Chicago Sun-Times in 1962. Mauldin retired in 1991.