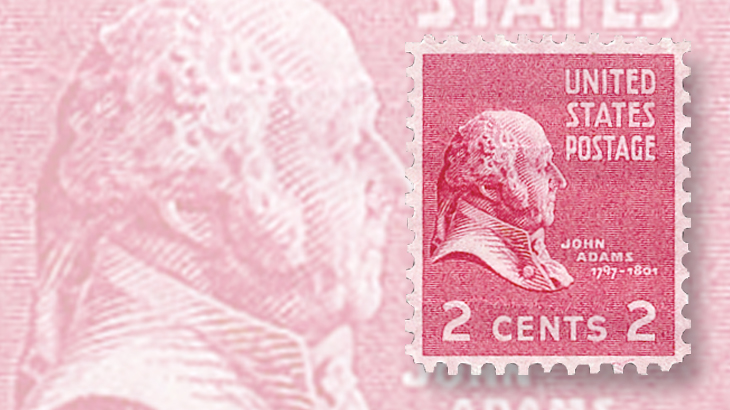 The second president of the United States, John Adams, was honored on the 2¢ stamp in the 1938 Presidential definitive series.

Adams was born Oct. 30, 1735, in Quincy, Mass., the son of a church deacon and farmer. Adams attended Harvard University at age 16, graduating in 1755 and earning his master’s degree in 1758 after studying law.

Though he opposed the Stamp Act imposed upon the colonies, Adams took the unpopular task of defending the British soldiers placed on trial for killing civilians during the Boston Massacre. He gained an acquittal for six of the eight soldiers who were charged.

Serving in the Continental Congress, Adams was among those appointed to draft the Declaration of Independence. He oversaw the Continental Army during the Revolutionary War, and he helped bring that war to an end, negotiating the Treaty of Paris.

After serving eight years as vice president under Washington, Adams won the presidency in the election of 1796. Thomas Jefferson, one of his opponents and the runner-up in balloting, became vice president, in accordance with the election laws of that time.

When relations with France worsened during that country’s war with Great Britain, Adams increased America’s naval and military strength and again was successful in ending hostilities.

The strengthening Democratic-Republican Party, led by Thomas Jefferson, defeated Adams in the 1800 election, thereby limiting him to just one term as president.

He wrote extensively during his retirement, including letters to Thomas Jefferson, with whom he had formed a cordial relationship following years of disagreement.

Despite his significant role in the founding of the country, he was not singularly honored on a U.S. stamp for more than a century, until a 2¢ rose-carmine stamp depicting him was issued in the Presidential definitive series of 1938 (Scott 806).